At the edge of the village of Hallstatt, above the road to Obertraun, stands one of the most beautiful jewels from the Baroque period in the UNESCO World Heritage Region of Hallstatt Dachstein Obertraun: the Kalvarienberg Kirche or Calvary Church. Twenty-four thousand shingles of larch wood were needed to rescue this gem from ruin. The curved roof of the baroque chapel was renovated in the last decades according to the original design. The church was originally sponsored alongside the Way of the Cross Chapel (Kreuzwegkapelle) in 1711 by a childless court scribe/salt ‘lord’ and his wife.

Visitors to the church will be delighted.

A Baroque jewel! Visitors to the church will find this label quite fitting. The beautifully-carved crucifixion figures inside the church are credited to the workshop of the famous Baroque sculptor Meinrad Guggenbichler. According to art historian and Guggenbichler biographer Heinrich Decker, this figure group represents an important work by the sculptor himself as well as an excellent example of Guggenbichler’s later work. As a ‘journeyman’ sculptor, Guggenbichler travelled throughout the country plying his trade until he finally put down roots in nearby Mondsee, living and working there for 44 years. In 1723 at the advanced age (at least for that time) of 74, Guggenbichler died in Mondsee.

A Calvary church is built to honour the sufferings of Christ, as a plea for one’s own salvation and in Hallstatt, as a place of prayer and comfort for the miners and their families. According to Professor Rudolph Lehr in his book ‘Hallstatt: History and the Present’ (1979), the patronage demonstrates not only the wealth of the salt lords but also their deep-seated faith.

Our tip: The Calvary Church in Hallstatt in an excellent starting point for an exploratory tour through the world-famous lake village in southern Upper Austria. The tranquil church lies directly above the Hallstatt underground garage (P1) and offers wonderful views of the century-old homes in the village as well as the fjord-like lake.

Hotels and accommodation providers in Hallstatt, Bad Goisern, Gosau and Obertraun offer the ideal room or apartment for your holidays, no matter what your tastes. Aside from establishments rated according to the international "star" scale, you will also find around Lake Hallstatt in Austria businesses that have been awarded two to four "edelweiss". The more flowers, the greater comforts you can expect. Whether you eventually find your cozy nest in an elegant 5-star luxury hotel, at comfortable guesthouse, a family-friendly apartment, or on a traditional farm, the choice is always entirely up to you. 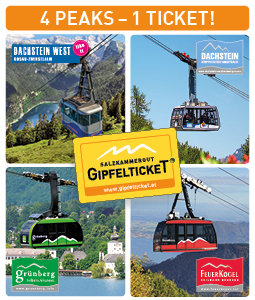